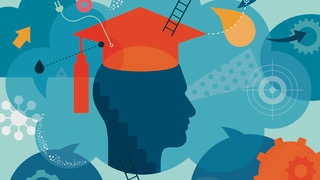 As I read Augustine’s Confessions, I am struck by how fluid, dynamic and intimate is his notion of truth.  For Augustine, God is not known by conceptualization (saber) but encountered in love (conocer).  We do not know God [scientia] but are conscious of God [con-scientia].  Or as Caputo points out in More Radical Hermeneutics, ratio (interpreting) and oratio (praying) are inseparable.”  Or as Derrida observed, “I owe it to my autobiography to say that I have spent my life teaching so as to return in the end to what mixes prayer and tears with blood, salus non erat in sanguine” [salvation is not found in blood alone].  Teaching is a mixture of prayers and tears with blood.  Salvation, for both teacher and student, is to be found in the admixture of blood with prayers and tears.
Henri De Lubac observed, “Every time man changes his way of thinking, he fears he is losing his God.” In fact, the truth is that every time we refuse to change, broaden, expand and transcend our ways of thinking, we lose touch with the infinite ocean of mystery that is our God.  With Augustine and Nietzsche, who gave us a pail capable of emptying the ocean?  To be educated in the truest sense of the word is not to be informed but to be enlightened, to come out of shadows.
Our modern political, social and cultural discourse has become either rigidly dogmatic (truth is this and only this) or utterly skeptical (there is no truth).  The truth is that truth is like love, hold it too tightly and you kill it; hold it too loosely and it slips through your fingers. Truth is neither a static concept nor a vague feeling of correctness.  Both dogmatism and skepticism fall on the same sword – neither is able to protect the dynamic tension, which is at the heart of a hermeneutical sense of truth.
Augustine gave us a clue as to the true nature of education when he asked: “What do I love when I love my God?”  Not some transcendental signified beyond language: “The name of God is the name of what language most deeply loves and affirms, dreams and desires.  The name of God is the name of yes.”  Augustine is a thinker who dreams of an impossible God, a God of pure open possibility.  To be educated is not merely to be informed but to be transformed, transformed by a personal encounter with an ‘other’.  As Augustine affirmed, “non intratur in veritatem nisi per caritatem … you cannot enter truth except through charity.”  Or with Pascal, “la verite sans la carite c’est une idole … truth without charity is an idol.”
In our modern context, such a hermeneutically full view of truth is sadly out of fashion.  Ridicule, ad hominem arguments and a veritable checklist of non-sequitors and logical fallacies have replaced reasoned and charitable debate.  Now, so it seems, we care more about winning than about truth, goodness or beauty.  Education has become, more and more, a process of sheer indoctrination.  Teachers should teach students how to think, not what to think.  As Aristotle said, “Educating the mind without educating the heart is no education at all.”
As St. Rose Philippine Duschene opined: “You may dazzle the mind with a thousand brilliant discoveries of natural science; you may open new worlds of knowledge which were never dreamed of before; yet, if you have not developed in the soul of the pupil strong habits of virtue which will sustain her in the struggle of life, you have not educated her, but only put in her hand a powerful instrument of self-destruction.”
Education is not about mere instruction, much less is it transmission of certain technical skills, as though university were no more than a glorified trade school.  To educate is not to indoctrinate.  A true liberal education would educate the whole human being: head, heart and will – scarecrow, tin man and lion as it were.  E-ducare, to lead out of, to lead out of darkness, shadows and images, to lead into light, truth, goodness and beauty.
Let me conclude by offering an example.  I learned to play guitar as a child.  My teacher was Lou Columbo, a marvelous jazz guitarist.  I wanted to learn to play because I heard Jimi Hendrix’s Are You Experienced?  And thought, “My God a guitar can do that!”  In any event Lou taught me chords and scales for two years and I was less than enthused.  It would take me many years to appreciate musical tools he put into my unskilled hands.
In any event, here is the point: “The goal of education is to lead the child to understand that discipline, law and rules are not meant to destroy his freedom, still less to crush or enslave him.  Their purpose is rather to develop his ability to perform actions of real excellence by removing dangerous excesses, which can proliferate in the human person like weeds stifling good grain, and by guarding him against unhealthy errors that could turn him aside and jeopardize his interior freedom.”
I never learned to play guitar like Jimi Hendrix.  But did learn to play like myself.  Father Laberthonnière said it best nearly 100 years ago.  We seek, “the freedom that does not give into self but conquers self …  One becomes free only by becoming better.”  Whether we are speaking of guitar playing, philosophy, theology, science, writing, cooking or athletic games, “one becomes free only by becoming better.”  In short, the goal of education is not instruction but an augmentation and expansion of true freedom.

I have a few maxims for education that we might consider:
1.  Our modern American penchant for teaching to the test is neurotic, idiotic and a disservice to teacher and student alike, especially the teaching of humanities, language arts and the arts in general, not to mention philosophy and theology.  Who cares if the student knows who Plato and Descartes are but cannot or does not think?   Who cares if they know that Bach was born in the 17th century and died in the 18th century if they have never heard a toccata or a fugue and have no appreciation for his music?  Education is about transformation, not information!

2.  Teaching must address the whole student.  With Aristotle and St. Rose Philippine, if we only educate the mind, we have not educated but placed in the hands of the student a powerful weapon of self-destruction.  True education forms the mind, the will, the emotions and, even, the senses.  Education is a process of inculcating deep values in the student and the teacher.

3.  Education, in neither its form nor its content, can ever be reduced to a merely technical endeavor.  The heart and soul of all good teaching has to do with a relationship, a relationship of mentoring and love between student and teacher: “Attention is the low-water mark of love.”

4.  Beware politicians on either side of the political fence who love to throw statistics at you to show how well or how badly we as a state or a nation are doing with regard to education.  There are lies, damn lies and statistics.  Effective teaching can no more be quantitatively measured than love, justice or morality can be quantitatively measured.  The best teachers I have ever had were not the ones that communicated the most facts or gave me the most skills.  The best teachers have ever had – Lou Columbo (guitar), Marjorie Gleason (English), Jose Solis-Silva (philosophy), Charley Cox (history), Mary-Emil Penet (moral theology), Jack Finnegan (canon law), Roger Radloff (psychoanalysis) and Susanne Cooke (Sacred Heart education) – lit fires in me that burn to the present day.

5. Finally, avoid abstractions in all their theoretical glory.  The people we put in charge of education should be master-teachers, not administrators, bureaucrats or politicians, much less should they be appointed as a reward for campaign contributions or as political favors.  If you want to know how to get elected, call a politician; if you want to know how to make a buck, ask a successful businessman; if you want to know to improve education, ask a good teacher.  Too much of what we call educational reform today is nothing but political grandstanding and mindless cost slashing. The reform of education should be guided by educators, not by politicians, accountants, lawyers or administrators.  We would do well to recall that “Principal” originally meant “principal teacher,” not CEO, CFO or Chairperson of the board.  The situation is even worse in the Church, where a pastor who in some cases has never taught a single class at any level, runs the school.