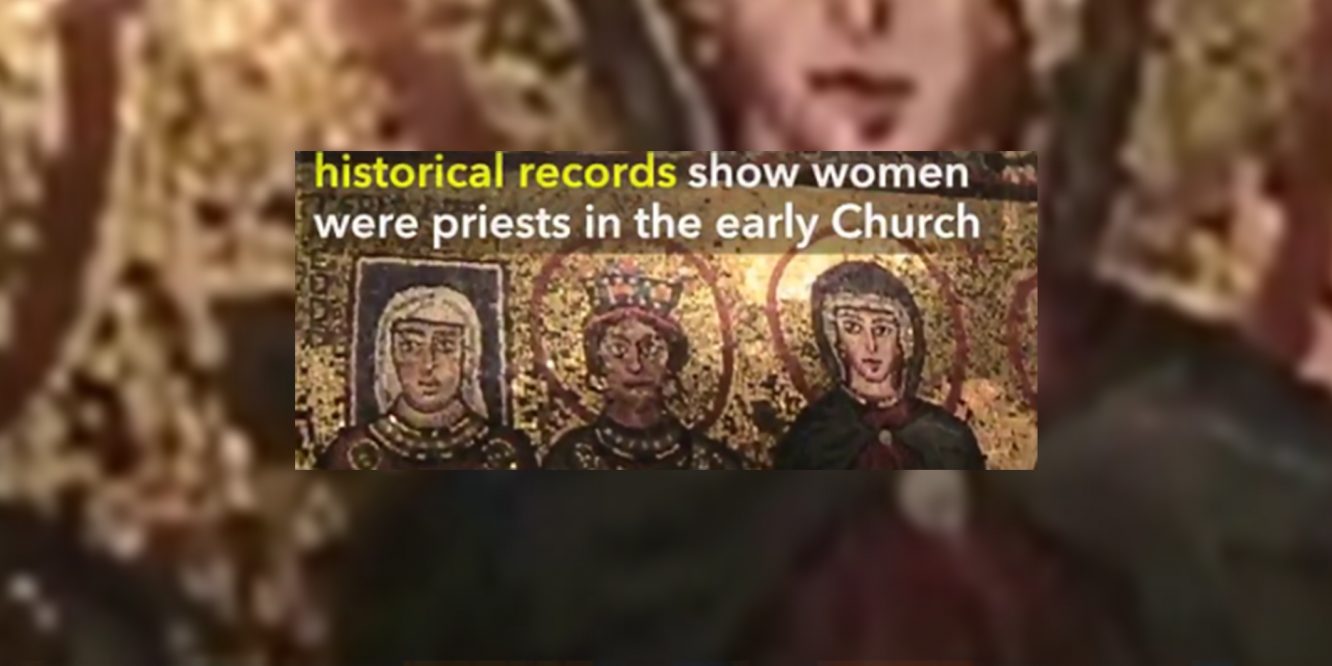 The 1976 Vatican document, “The Declaration on the Question of the Admission of Women to the Ministerial Priesthood,” purported to end debate by saying that women could not be ordained.  The document gives two reasons for the prohibition: first, Jesus was male and priests are to imitate Christ; second, the tradition of the Church has consistently excluded women from the ordained ministry.  Neither reason stands up to much scrutiny. As for the masculinity of Jesus, we recall the ancient principle that, “Whatever has not been assumed has not been redeemed.” [Athanasius, Gregory Nazianzen, Cyril of Jerusalem] Second, Jesus did not “ordain” anyone, male or female!

In either case, it would create an odd and sui generis sort of sacrament.  Priesthood would be the only sacrament which would be given not to all the faithful but only to the male faithful.  What sort of Christian anthropology could justify this?  Does not baptism make us all “fully Christian,” “neither male nor female,” as St. Paul writes?  Hence, as Sister Chittister writes, “Either all grace is given freely to both males and females, or women are lesser creatures capable of less blessing and gift … Either Christ came so that all would have the fullness of life and have it more abundantly or the Incarnation is more the salvation of males than it is of the human race.”

Catherine Mowy LaCugna writes, “The work of women highlights new images and metaphors for both God and human experience, and revises the way we use theological and religious language.”2  As such, just as theology, spirituality and the ecclesial life of the Church are enriched by a full integration of the perspectives and participation of women, so too would the priesthood be enriched.  Men are not rendered incapable of being priests because they can be fathers and husbands; in the same way, women cannot be logically barred from priesthood because they can be wives and mothers.  One fears that the prohibition is held in place simply as a continuation of societal prejudice and historical misogyny – the very sorts of evil the Gospel abhors and purports to do away with.

Charity and decency demand that one cannot reject the ordination of women on the absurd grounds that “men are clearer images of God than women are.”3  To say so would be rank misogyny, masquerading as pious theology.  One might recall that Augustine held that, “the soul does not have a gender.”  Are women’s souls less conformable to the image of Christ?  As the old feminist barb from the 1970’s goes: “If you are not going to ordain women, stop baptizing them.”  Priesthood, along with prophecy and kingship, are given to all the faithful by virtue of baptism.

As for St. Paul, he was a man of his day and his negative views of women is no more relevant today than is his positive view of slavery. Again, refer to Galatians 3:28: “There is neither male nor female; for you are all one in Christ.”  The Gospel and the teaching of Paul, as we read them, contain the movement toward eliminating all forms of discrimination – sexual, social and racial.  The fact that the people of his day were not yet ready to hear this message does not mean that we should not heed it today!  As Henri de Lubac stated, “Every time man changes his way of thinking, he fears that he is losing his God.”  We are not losing our God.  We are simply coming to understand, ever more deeply, what Jesus is trying to tell us!

Joan Chittister, O.S.B. in her book, Winds of Change, recounts the exchange of an American woman and her local bishop.  The bishop said: “‘I have a grave theological problem with the ordination of women … I want you to realize that you and I have a fundamental difference on that issue … but I also want you to know that if the Church gave permission for the ordination of women, I would ordain a woman immediately.’ The woman responded: ‘In other words, Bishop, you don’t really have a theological problem with the question at all.  You have an authority problem that is masking as a theological one.’”4 This anecdote is very much to the point.  If the only reason women cannot be ordained is that the Church says so, that is not a reason or reasonable, but an argument from pure authority, which, as Aquinas states, is the weakest possible argument or is no argument at all.  “Because I say so” is not an argument but a brute imposition of force.