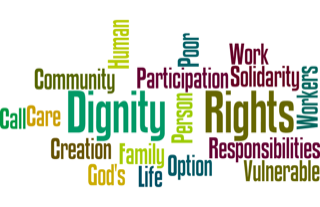 The virtue of justice is one of the four cardinal (natural) virtues that the Roman ethical culture inherited creatively form the Greeks and in turn transmitted to Western Civilization, particularly the Roman Catholic Church, which developed its understanding further. The virtue of justice necessarily follows from the social nature of human beings that necessarily live in some form of community. In the following comments I will consider briefly the practice of justice according to the social doctrine of the Church, and in the context of the present social and political conditions in the United States.

We may very briefly state here that our individualistic culture in the West, particularly the United States, emphasizes unilaterally the first aspect of justice, namely, the commutative aspect, at the almost total exclusion or considerable distortion of the other two aspects. This individualistic understanding of society and of the virtue of justice entails a merely contractual relationship between the members of society as the basis for the state and for the pursuit of justice.

It must also be stated here that totalitarian attempts to organize society and its political and juridical institutions in fact reject to a very great extent the commutative aspect of justice, emphasizing different combinations of distributive justice with legal justice. These totalitarian social and political attempts ultimately subordinate the individual persons to what is primarily an oppressive legalism that is closely associated with the arbitrary imposition of manipulative distributive policies.  In fact, in the absence of a true harmonization among the individual members of society in accordance with commutative justice, totalitarian ideological notions and political initiatives most frequently end in the excessive political control of the immense majority of the members of society by a few, and even by tyrannical individual leaders.

In the final analysis, in order to avoid the distortions to which our notions of justice may succumb, this virtue entails necessarily the exercise among the members of society of deep solidarity or even love, namely, of truly sharing in such a way that one’s individuality would be inseparable from a profound sense of being ‘we’. Or in other words, the practice of justice entails that the values, particularly ethical ones, that must be pursued by the members of society and by the legislation of any state, must respect the absolute dignity of each person, which is itself inseparable from the pursuit of the common good.

Within the parameters of the dynamism of human history and of human culture, Pope John Paul II emphasized that true justice must be the result of the commitment of all human beings to a culture of authentic life that is the expression of their transformation of the culture of death into the culture of life. This culture of life must be understood by Christians as the manifestation of the Gospel of love based on Christ. Pope John Paul II reminded us in his encyclical Evangelium Vitae that “In this mobilization for a new culture of life no one must feel excluded: everyone has an important role to play.” While the Pope emphasizes in a special way the evil of abortion, his pro-life doctrine is not merely against abortion. For him the evil of abortion is inseparable from the other evils of the culture of death. As he tells us, “Where life is involved, the service of charity must be profoundly consistent. It cannot tolerate bias and discrimination, for human life is sacred and inviolable at every stage and in every situation; it is an indivisible good.”  Citing Gaudium et Spes of the Second Vatican Council, the Pope reminds us that according to this Council, “Whatever is opposed to life itself, such as any type of murder, genocide, abortion, euthanasia, …Whatever insults human dignity, such as subhuman living conditions, arbitrary imprisonment, deportation, prostitution, the selling of women and children; as well as disgraceful working conditions, where people are treated as mere instruments of gain rather than as free and responsible persons; all these things and others like them are infamies indeed.” Of special relevance to the present cultural landscape in the United States, Pope John Paul II reminded us also of the profound evil that has been generally committed by human beings against the environment and the earth as such.  Furthermore, he also pointed out that universal health coverage has become, in most countries, due to their socio-economic development, a personal right that must be guaranteed by the state.

The above integration of values and ethical norms in the pursuit of the culture of life must be contrasted with the ideological and political polarization of those in the United States that promote, frequently with good intentions, the preeminence of one specific moral issue, such as abortion or climate change, at the expense of all the other moral issues.

In connection with the above, one must remember the words of Pope Francis, according to which the moral and political exigency, particularly of the Christian faithful, is never the concentration on the promotion of the absolute primacy of a so called preeminent single moral imperative, no matter how important this may be, but entails the holistic commitment to change the world at large.  As Pope Francis tells us in Evangelii Gaudium, “An authentic faith … involves a deep desire to change the world, to transmit values to leave this earth somehow better than we found it… If indeed ‘the just ordering of society and of the state is a central responsibility of politics,’ the Church ‘cannot and must not remain on the sidelines in the fight for justice.” The task of changing the world includes a commitment to transform society as a whole. This entails changing the social and material conditions of human existence as well as saving the earth at large from the imminent potential terrible consequences of climate change. The United States used to be a global leader against the catastrophic consequences that may result on account of climate change. At present, some influential political and ideological positions in the United States not only minimize, but also deny the existence of climate change. As the Bishop of San Diego, Bishop Robert McElroy, has indicated, these positions entail a risk for “the survival of the planet, which is the prerequisite for all human life.”

It must be pointed out here that the understanding of moral norms or human values as a mere aggregate summary of separate issues, including a pretended preeminent moral issue, is the expression of an individualistic interpretation of reality very typical in the American culture. This individualistic interpretation contrasts with the emphasis in the Catholic tradition of the communitarian nature of human beings and of the state as such, ultimately based on the indivisible communion which is the Trinitarian God of Jesus Christ. This individualistic culture, which is the basis for a mere contractual understanding of the state as such, is in many ways the foundation for what Pope Francis calls the throwaway culture that pervades our Western societies, and especially the United States. This culture has the tendency to create “a mentality in which everything has a price, everything can be bought, everything is negotiable.” This throwaway culture emphasizes the importance and benefits of a few powerful people who control the political and productive mechanisms of the economic processes and discards or manipulates those who are deemed inefficient or may be at best considered exclusively from the point of view of how they may be useful for the ongoing domination by the few. According to Pope Francis, this throwaway culture is inherently violent and oppressive. Indeed, according to him, this culture is the one that is the underlying basis for the violence of abortion (which discards the unborn as inconvenient), and such other violent practices as euthanasia, war, genocide, terrorism and the death penalty. Accordingly, the commandment “Thou shall not kill” entails, for Pope Francis, that we must confront the culture of death, on the one hand, by undergoing a personal conversion that focuses on our dependence on the love of God and on our solidarity with the other human beings that as children of God are our brothers and sisters. And on the other hand, by fighting against oppressive human, social, economic and political structures which are the unifying and comprehensive basis of the distinct, but not separate, moral issues that must be addressed by the pursuit of justice in society.

In line with the above, and in contradistinction with the individualism of the throwaway culture, Pope Francis emphasizes a culture of encounter. This culture of encounter emphasizes a “face-to-face encounter with others, with their physical presence which challenges us, with their pain and their pleas, with their joy which infects us in our close and continuous interaction.” This culture of encounter requires a welcoming and dialogical attitude towards others, especially those who have been in many ways socially and economically marginalized or forced to immigrate. This welcoming and dialogical attitude is contrary to a paternalistic condescending attitude that results from a discriminatory or even racist relationship with others that are considered inferior.

For Pope Francis, the culture of encounter is the expression of the social nature of each human being and of the latter’s intrinsic and absolute value. In the midst of the political polarization and tribalism so pervasive in our present American culture, trying to promote the social doctrine of the Catholic Church, particularly the culture of encounter taught by Pope Francis, will undoubtedly help us to contribute to the healing and reconciliation in our American society.